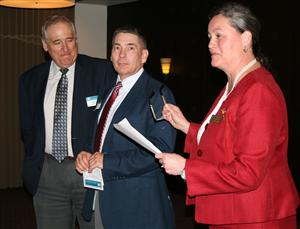 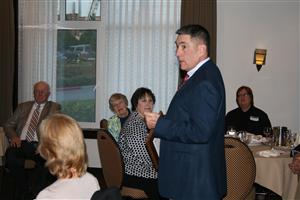 To the right, OESD Superintendent Greg Lynch addresses the membership and guests of WASA Region 114.

Awards presented at the regional level include:  the Community Leadership Award, which is presented to community members or groups in recognition of their contribution to education; and the Award of Merit, which is for those who have demonstrated effective leadership at the regional level, and have made a significant contribution to WASA through their work in the field of education in Washington.  The Award of Merit is known unofficially in Region 114 as the Kurt Wagner Memorial Award of Merit.

Region 114 had a stellar group of honorees.  The dedication that these people have to education in Washington is truly inspirational.

Bremerton School District honored two of their community members, Jonee Dubos and Annie Gambardella.  Both of these volunteers have dedicated many hours to the district for various school events, and are co-chairs of the Citizens for Good Schools Committee. 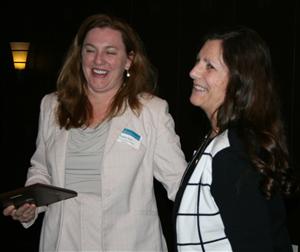 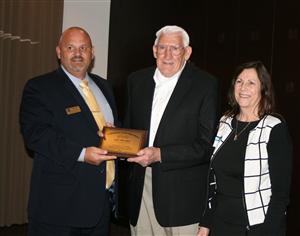 North Kitsap School District also had two honorees:  Gale Rhoades and Tania Issa.  Mr. Rhoades is a retired specialist in media at BOEING, and has been volunteering in the Recording Arts program at NK for 13 years.  Ms. Issa was instrumental in mobilizing the North Kitsap community as the Yes for NKSD Kids chairperson.  Her dedication resulted in passing their renewal levy in February.   Above and on the left, Patrick Olson, Director of Career and Technical Education at North Kitsap School District, presents the award to Gale Rhoades, along with Superintendent Patty Page.  On the right, Tania Issa accepts award from North Kitsap  Superintendent Patty Page.

Port Angeles School District honored the Port Angeles Education Foundation (PAEF), a group of farsighted community leaders that was created in 1991.  The PAEF supports student scholarships, basic needs and teacher grants through their generosity of resources.

South Kitsap School District honored two individuals with the Community Leadership Award:  Bob Lamb and Bernie Golbeck.  These gentlemen both serve on the Community Budget Advisory Team (CBAT), which is a SKSD Board appointed group that reviews the budget and makes recommendations to the Board.  Their role as a part of the CBAT team is to advise the Board of Directors of SKSD on how to improve budget analysis to better align with the District’s vision, mission and strategic plan.

The recipient for the Kurt Wagner Memorial Award of Merit was nominated by South Kitsap School District.  Dr. Michelle Reid, Superintendent for SKSD, has this to say about the honoree, Olympic ESD Superintendent Greg Lynch:

“It is my pleasure to nominate Greg Lynch.  I cannot think of anyone more deserving in terms of providing leadership for our region.  Greg is a leader with integrity who definitely ‘walks his talk’.

“While transitioning into a new position, Greg found time to be my WASA appointed mentor as a first year superintendent.  Mine was not the usual first year experience and Greg was always there, at any time day or night, to provide support and advice.

“Greg exemplifies the term leader.  He is collaborative and resolutely takes the high road; seeking out opportunities to serve.  He defines leadership.”Above and to the left, OESD Superintendent Greg Lynch (center) receives the Kurt Wagner Memorial Award of Merit from WASA Executive Director Bill Keim and Dr. Michelle Reid, Superintendent of SKSD.  The Olympic Educational Service District is proud that our superintendent was chosen for this prestigious award.  Congratulations Superintendent Lynch!Wendy McComb
wmccomb@oesd.wednet.edu
360-478-6884