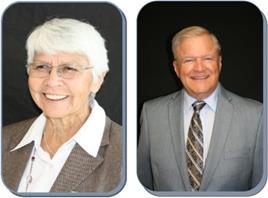 Two new Board members took their Oaths of Office pledging their service to the OESD 114 Region this past year.  Shirley Johnson of Neah Bay (Director District 7) was sworn in on August 21, 2014, and Conrad Green of Poulsbo (Director District 4) was sworn in on June 18, 2015.  Both leaders have diverse backgrounds and high interest in serving the mission of the OESD in support of education in the region.

TRIBUTE TO BOARD MEMBER JEAN WASSON

On March 19, 2015, Board members, Superintendent Greg Lynch and the OESD staff gathered to pay tribute to Board Member Jean Wasson who passed away on March 9, 2015. Photos were taken and a special plaque was made to honor her 30 years of contribution to educational boards (16 years as a North Kitsap School District School Board Director, which began in 1983, and 14 years as an OESD Board Director, which began in 2001). During her service on the OESD Board of Directors, Jean also contributed some of her years of service to the AESD Executive Board.

Board members reflected upon Jean’s dedicated and greatly valued participation as a strong advocate for our educational system in support of our youth.  She will be dearly missed.