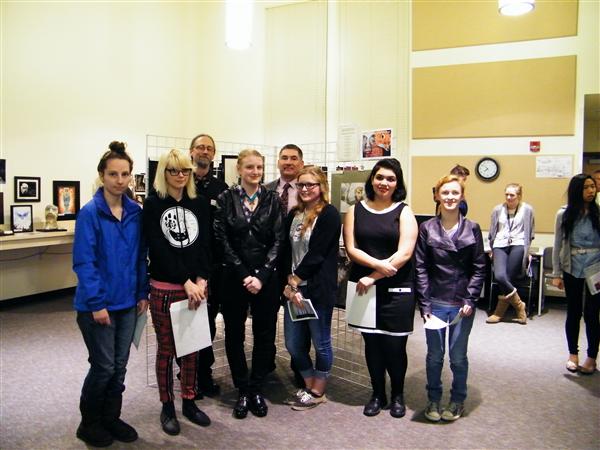 People’s Choice Winner (on display in the OESD lobby):

The People’s Choice winner is determined by ballots cast by visitors to the High School Art Show exhibit at Olympic ESD. Caitlyn will receive a $200 purchase award and her piece will become a permanent part of Olympic ESD 114’s High School Art Collection.

State Winner (on display at OSPI in Olympia): North Kitsap High School’s Courtney Palodichuk received the OSPI Staff Award for her piece titled “The City” (image attached). She will receive a $200 purchase award and her piece will become part of the permanent art collection on display at OSPI. Her piece, along with the other 11 winners, are highlighted on OSPI’s Art Show page at http://www.k12.wa.us/Arts/ArtShow/ArtShow15/winners.aspx. There is also a press release from OSPI here: http://www.k12.wa.us/Communications/PressReleases2015/ArtistsHonored.aspx.Sarah Freitas Honored by the OESD Board of Directors: Sarah Freitas has coordinated the OESD Regional Show since 2007, and has been involved with it in some capacity since 1993. The OESD Board of Directors honored Sarah for her wonderful work and dedication to the program at their meeting on March 19, 2015, and presented her with a special plaque.