The Washington Association of School Administrators (WASA) Region 114 held its Annual Regional Awards Dinner at Anthony’s in Bremerton on April 24, 2012. Eight individuals from five districts in the Olympic ESD 114 region were honored that evening. 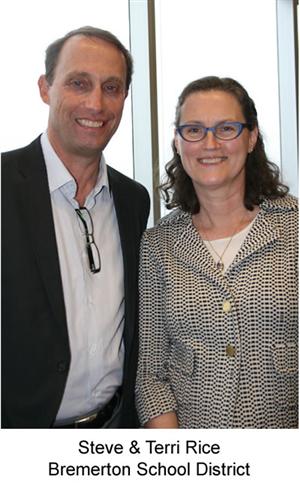 Steve Rice is a dedicated, education minded parent and local businessman who has participated in numerous educational improvement initiatives in the Bremerton School District over many years, including such initiatives as planning for the future Youth Wellness Center, Boys & Girls Club, numerous Facilities Planning Committees and Mapping Bremerton Schools Future.

For the past six years, Harriette and Vicki have volunteered in Central Kitsap as mentors for young AfrCollins ican American females. This year, they have worked with three different groups, totaling 30 girls. They begin working with the girls in 8th or 9th grade and transition with them through high school. They meet once a week to discuss life events and issues personal to the girls. Harriette and Vicki also provide them with training in etiquette, as well as arranges for the group to meet community leaders. These ladies actively fundraise and send all of their girls to Kitsap County’s Women of Achievement luncheon, so the girls can practice their skills and view positive role models in the community.

Ken Shawcroft and Jane Ritley founded the North Kitsap Schools Foundation in 2003 to promote and help fund the best possible learning opportunity for all students of the North Kitsap School District. During their term as board members, they awarded more than 76 classroom grants totaling more than $25,000 to teachers to implement innovative and creative learning projects. They extended their volunteer efforts to help facilitate grants from area foundations and set up a variety of endowment funds.

Chief Wernet is a dedicated and inspiring community leader and partner in the District’s “Declaration of Interdependence”.  Mike demonstrates his belief in the document’s opening statement: All children are capable of success, without exception, through action.We believe a successful child is Safe, Challenged, Healthy, Connected, Supported, and Hopeful and Mike is instrumental in bringing these tenants to the children in South Kitsap.Examples of tasks/events where he has taken an active role include WSU superintendent intern whole child panel, Feed to Children event – helped distribute meals to South Kitsap families in need, and Bike rodeo – helping organize a yearly bike safety program for kids. 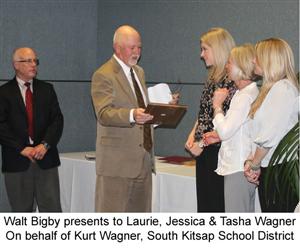 In the emotional culmination of the evening, Dr. Kurt Wagner was awarded posthumously the WASA Region 114 Award of Merit. Dr. Wagner lost his short battle with cancer just a few days before the Awards Dinner. The award was accepted by his wife, Laurie Wagner, and daughters Jessica and Tasha.

Dr. Wagner worked a number of years as an administrator in Central Kitsap School District, and with South Kitsap School District, when he was Deputy Superintendent until his death. He was the 2011-2012 WASA Standing Committee Chair for Professional Development, board member of WERA, mentor and president for the WSU Superintendent Certification program, and facilitator for extended all-day kindergarten. Dr. Wagner was a leader in the development of early learning partnership and the “Help Strikeout Hunger” program. These are just a few examples of his unselfish service to the administrators, teachers, students, and parents in the WASA Region 114 service area.Want to know more about WASA?  Check out their website: www.wasa-oly.org